This is a recurring series which attempts to combine my lifelong passion for trading cards with my semi-professional interest in celebrities.  Today, I feature two NFL teams for no specific reason.

NBA Hall of Famer Charles Barkley was born in Alabama and played professionally in Philadelphia, Phoenix and Houston.  For his Celebrity Jersey Card, he showed support for former quarterback Donovan McNabb.  I know of no connection between McNabb and Barkley nor Barkley and Washington.  I don't think the "round mound of rebound" could have played quarterback, but he might have made an interesting fullback. 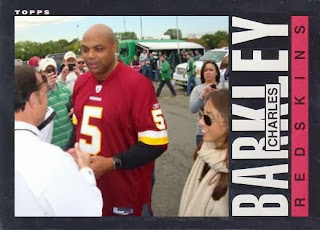 The late Tim Russert was a native of Buffalo, NY, which explains his Bills jersey.  It doesn't explain the #72 though.  The best player to wear #72 was probably Ron McDole.  I wonder if the number choice was intentional for any reason.  Either way, Big Russ looks good on his Celebrity Jersey Card and I won't even take off points for the dress shirt under it. 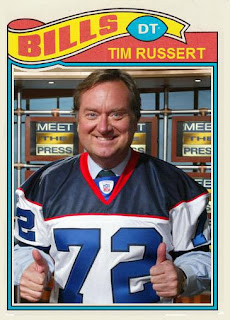 Nice to see Tim Russert's son following in his footsteps.