What better way to start Christmas week than with a festive M&M in Las Veags.  Thanks to Jean and Scott, we have the opportunity.
Some may say Scott would go to Vegas just for this picture to give me for the site.  I really could not argue that point, but in this case, I know they went for other Vegas fun stuff.
Did I hear PaiGow?  I am sure they heard it several times.
It really doesn't matter to me why they went to Vegas.  Actually, it doesn't matter to Scott either...just as long as he goes to Vegas.  What matters is that while there, they thought of me and got the picture when the opportunity arose.
That is the essence of Friendly Encounters.  That is also the essence of great people like Jean and Scott.  Do they ever tire of trying to get fun celebrity pictures for me?  I would never know, because they always seem eager to help me.
They are great family and I love them dearly.  I love the picture, too.  Few things scream festive more than Vegas, a beer and a big holiday M&M.
Thanks guys! 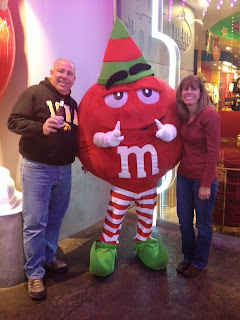 Scott, the Christmas M&M and Jean Parker in Las Vegas, NV-November 2013.
Posted by Johngy at 6:00 AM

We love you too!
Merry Christmas!