"Here comes the Axe, here comes the Smasher.  The Demolition is a walking disaster."  I can still hear their entrance music.  I thought it was pretty cool.
I am talking about the wrestling tag team named Demolition, originally Randy Colley and Bill Eadie.  Barry Darsow quickly replaced Colley and Demolition started climbing the ladder of success.
At first, they were called the WWF's answer to the legendary Road Warriors (who were highly successful elsewhere), but Demolition proved to be successful in their own right through their own effort.  Demolition win the WWF tag team titles three times.
They also had a brief feud with the Road Warriors, but for whatever reason, it did not develop into the kind of long term legendary battle it should have been.  I think Vince missed the mark on this one.
At Great Lakes Championship Wrestling's Blizzard Brawl in 2012, I met Demolition.  I was happy that they donned the face paint for the show, but I would have loved the full gear, too.  Many years passed their prime, they still looked pretty good.  As a matter of fact, at the time, they were the reigning tag champs at GLCW.
They were really cool.  They talked briefly of their WWF days and reuniting many years later.  I think they loved the nostalgia as much as I did.  To me, it is like seeing my old WWF action figures coming to life.
Thanks to David Herro and GLCW for scratching two more off my list.  Now if I could just get that song out of my head! 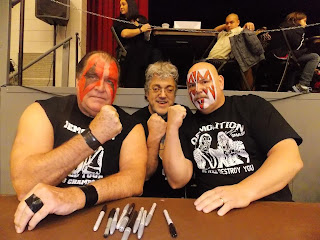