Matt Parker met actor Brian O'Halloran at Days of the Dead in Chicago last year.  Actually, Matt did more than just meet him, he interviewed O'Halloran.  That interview can be found at On the Beat with Brian O'Halloran.
O'Halloran is a regular in Kevin Smith films.  On a trivial note, in all of Smith's films, his character's last name has been Hicks.  Of course, O'Halloran has also done other work, too.
Matt gets kudos for pulling off this interview.  I believe it is his biggest name so far, at least outside of the sports world. 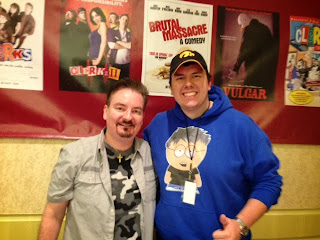 Brian O'Halloran and Matt Parker in Schaumburg, IL-November 2013.
Posted by Johngy at 6:00 AM