This is a recurring series whose concept I borrowed from other bloggers.  Cards That Never Were are cards that are created for former players who did not have a card in particular set for whatever reason.  I am here to right those wrongs.
A few days ago, I featured cards I created for former quarterback Kim McQuilken.  Today, I am filling in some gaps for Pat Sullivan, his former teammate with the Atlanta Falcons.
Quarterbacking at Auburn, Sullivan won the Heisman trophy in 1971.  He was drafted in the second round by the Falcons.  Veteran Bob Berry was the starting quarterback in 1972, but the Falcons had high hopes for Sullivan.
In 1973, Berry was replaced by Bob Lee, who would start 10 games for the Falcons, with journeyman Dick Shiner starting the other four.  Like in 1972, Sullivan saw very limited action.
Sullivan started three games in 1974, with Lee and McQuilken starting the rest.  Sullivan threw for 45% with one touchdown and eight interceptions.
Steve Bartkowski was drafted in 1975.  Sullivan did start one game, but Bartkowski was now the future.  He would go on to play for eleven seasons in Atlanta.
Sullivan was done with Atlanta after the 1975 season.  He spend two more seasons with the Washington Redskins, but did not see any action.  Sullivan has gone on to a very successful coaching career at the collegiate level.
Topps saw fit to give Sullivan a card in the 1973 set, because he was a hot prospect.  They also gave him a card in 1975.  That's not good enough for me though.  I created cards for him for the missing years of 1974 and 1976. 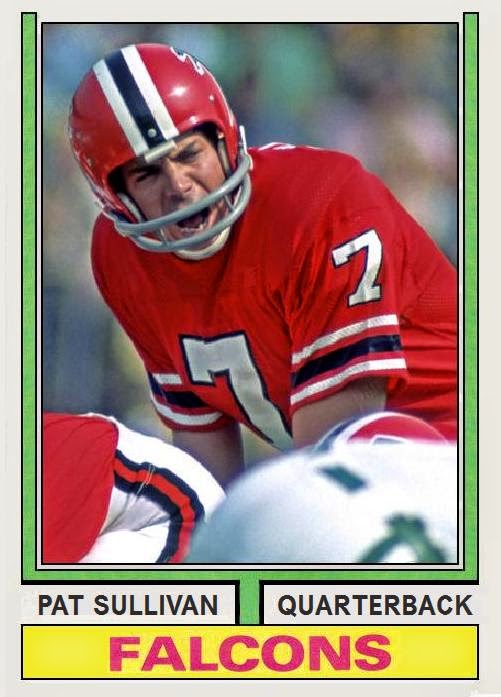 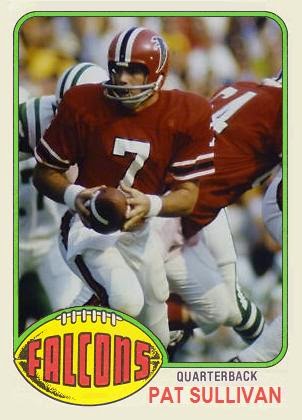