I met author Dirk Manning at a convention years ago.  I interviewed him then and have tried to interview him whenever I see him.  He's an interesting guy and a talented writer.
He is also a wrestling fan, which gives us a bit more common ground.  During our last interview, I asked Manning to make three predictions.  So far, two of his predictions are holding up and the third will be determined soon.  You can hear his predictions, along with some info on his projects at On the Beat with Dirk Manning at Wizard World 2014.
Dirk predicted CM Punk would not return to wrestling (or not for a very long time at least).  While we might not see him in a ring, Dirk did see Punk at a comic con a few years ago.  This is a rare photo indeed.  Fans of Dirk will spot it right away.  For those who aren't that familiar with Dirk, if you check out the Dirk Manning FB page and look at his profile picture, you will understand.
Manning is the mad genius behind "Tales of Mr. Rhee."  You can learn all about this great project at the Tales of Mr. Rhee Kickstarter page.  You can get some cool stuff with various donations, too.  I encourage all to check out Manning and help the cause. 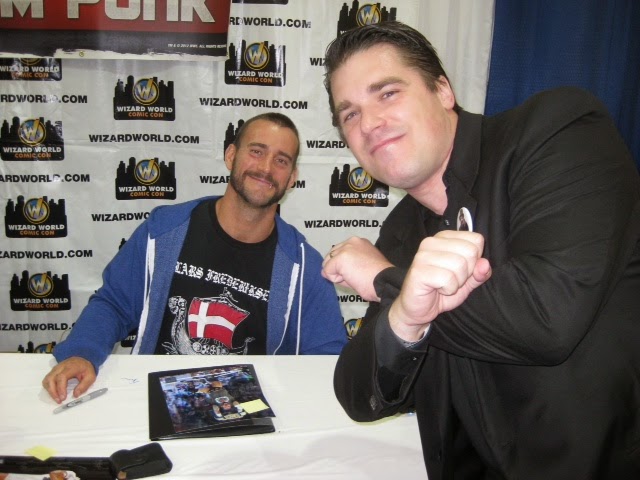