Athletes get trading cards.  Why not celebrities?  At least celebrities wearing athletic jerseys should get cards.  I am doing my best to create cards for jersey-clad celebs.  Today, we represent teams ousted from the NHL playoffs.

Actor Jim Carrey is a native of Ontario, Canada.  Especially in a hockey uniform, he might be confused with former goaltender Jim Carey.  Carrey donned the Penguins uniform for his role in Mr. Popper's Penguins.  I'll give the #8 to Mark Recchi.  Carrey does get extra points for actually being on skates for his Celebrity Jersey Card. 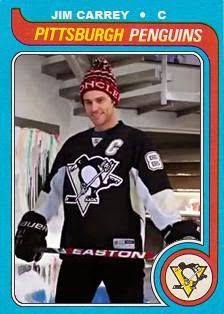 For the movie “The Return of Jezebel James,” Parker Posey wore a Brendan Witt jersey.  A screen cap from that movie landed her on a Celebrity Jersey Card.  I don't know if the Isles are her team.  A native of Baltimore, Posey might have chosen the Islanders over the closer Capitals.  If I ever meet her, I will ask that question. 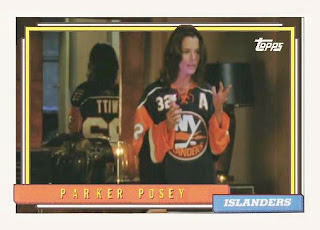