Athletes get trading cards.  Why not celebrities?  At least celebrities wearing athletic jerseys should get cards.  I am doing my best to create cards for jersey-clad celebs.  The Chicago Sky of the WNBA started their season yesterday.

Born in Wilmington, DE, Elena Delle Donne has played her entire pro basketball career for the Chicago Sky.  She is entering her third season and is one of the stars of the league.  At 6'5" and 170 pounds, Donne would be an interesting sight on skates.  She even made for an interesting Celebrity Jersey Card. 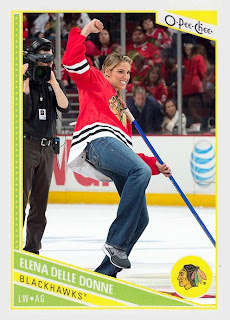 Coach and General Manager of the Sky, Pokey Chatman grew up in Ama, LA.  She starred at LSU before embarking on a pro career as a coach.  She has guided the Sky to two playoff appearances in her four years at the helm and this season looks to be the best yet.  Chatman seems to be putting some body language into her shot on her Celebrity Jersey Card.  No offense, but I hope the Sky shoot better than that during the season. 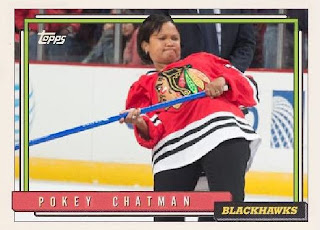