Back in 2000, "Hardcore" Heather Owens and I attended the Brian Pillman Memorial show in Cincinnati, OH.  We didn't go together, because we didn't even know each other.  This was pre-Johngy's Beat for me and pre-"Hardcore" for Heather.
As you can see from the picture below, Heather was young.  Who would have guessed that this young gal would earn the moniker of "Hardcore" to match her wrestling abilities.  That might be slightly misleading though.  Heather can certainly be "hardcore" in the ring, but she is not just that.  She is quite capable of putting on a scientific match.  Maybe she just prefers hardcore matches, which again, goes so counter from that innocent young lady in the picture.
Back in 2000, Glenn Gilbertti was better known as the Disco Inferno, a midcard success with the WCW.  He won the Television title twice and the Cruiserweight title once earlier in his career.  Once the WCW was folded into WWE, he moved on to wrestling in other companies as himself or the Disco Inferno character.  He was always entertaining and actually solid in the ring.
Heather and Disco in their primes together would be a fun pair.  I see an interesting mixed tag team in there somewhere.
Now, Heather wrestles all over, including at Resistance Pro, where she is currently part of a stable run by Warden Myers.  With Paloma as her tag partner and the Warden leading them, Heather is in for some interesting matches. 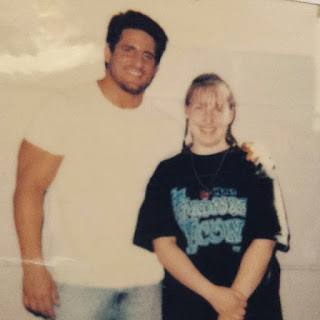 Disco Inferno and Heather Owens in Cincinnati, OH-2000.
Posted by Johngy at 6:00 AM