What better way to start off Halloween week than with Stoney McGee!  Seriously, I meant Frankenstein.  Still, it is always good to see Stoney and Tommy Else, too.
Unfortunately, the picture below saddens me a bit.  For one thing, I wasn't there.  I missed a Resistance Pro event.  This one was in Minneapolis and featured a zombie pub crawl.  I really wanted to go.
I was a little busy the next day though.  I had that Marathon thing to do.  There was no way I could have driven back from Minny and done the Marathon.  I had to miss the RPro fun.
Stoney and Tommy did not miss the fun though.  This is just one of the many cool pictures from that event.  Some pictures will never find their way to social media though.
Another thing sad about this picture is that it represents the beginning of the end of a great time in my life.  It was during the Minny trip that AMC announced they were dropping all reality shows, including the RPro reality show.  Shortly after this, things started to unravel and many people left RPro.  Stoney was one of the last ones to leave and his departure probably shocked me the most.
I don't want to get into the debate again.  That's been done to death.  I just want to say that I miss Stoney and the others.  I miss the fun we all had.  It's a shame.
RPro has rebounded and I have seen some of the departed since then, but the magic of that time will never be recaptured.  That is just part of life.  At least when it was all happening, I made sure to soak in the fun and the experience. 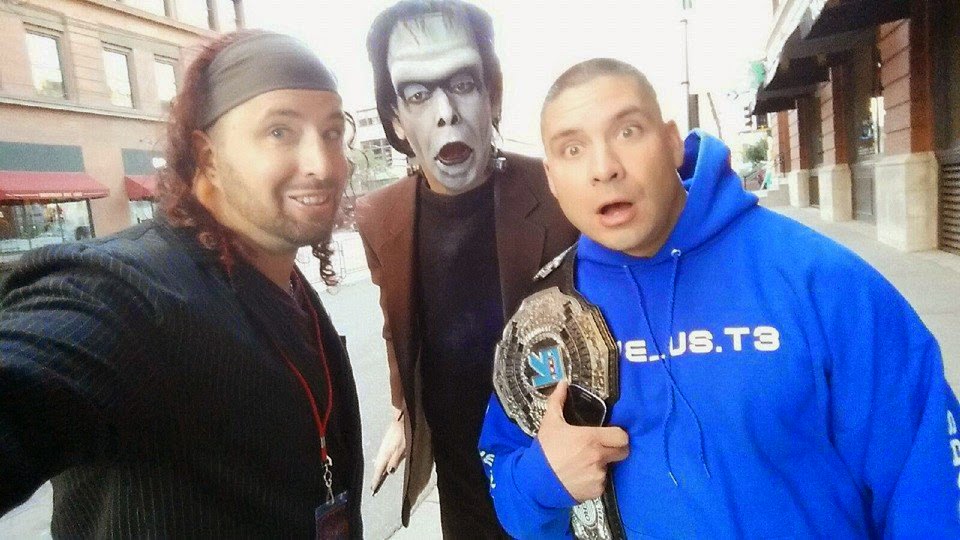 Stoney McGee, Frankenstein and Tommy Else in Minneapolis, MN-October 2014.
Posted by Johngy at 6:00 AM