Veteran actor Philip Seymour Hoffman portrayed Oakland A's manager Art Howe in "Moneyball."  Unfortunately, the native New Yorker passed away in 2014.  I am not even sure he is wearing a jersey on this Celebrity Jersey Card, but the rest of it is as authentic as can possibly be. 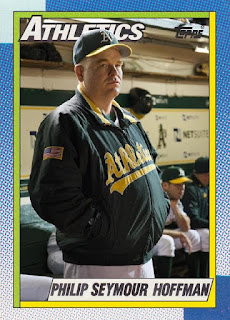 Scott Hatteberg was carving out a decent major league career with the Boston Red Sox as a catcher.  When he signed with the A's, they converted him to a first baseman.  His part in "Moneyball" was played by Chris Pratt.  Born in Minnesota, but raised in Washington, is a Seattle fan, but for that role and for this Celebrity Jersey Card, he is wearing the green and gold. 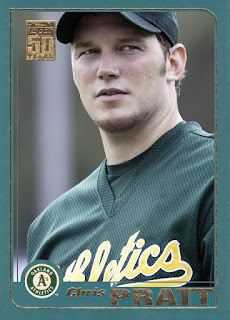