Bret Hart at Days of the Dead Chicago 2015

Wrestling Hall of Famer Bret "The Hitman" Hart was called "The Excellence of Execution."  His catchphrase was "The best there is, the best there was and the best there ever will be."  The first is deadly accurate.  The second is debatable, but he is definitely one of the all-time greats.
After a hugely successful run in the WWE, Hart's departure was legendary.  Then, Hart endured very questionable booking in the WCW.  Worse, he suffered a concussion which derailed his career, followed by a stroke, which ended it.
Some describe Hart as bitter and too old school.  I think he does sound bitter at times, but I can't argue with the points he makes.
I have met him several times and at the last Days of the Dead, we attended an intimate Q & A session.  Hart spoke candidly as usual and he made sense as usual.  I guess it is possible to be bitter and right, but I really found Hart to just be speaking from the heart.
Modern wrestlers could learn a lot from Hart.  He told great stories in the ring.  He worked his promos solidly.  He progressed from a tag team star to a multi-time Heavyweight champ.
Once again, I applaud Days of the Dead for thinking outside of the box and bringing in a wrestling legend like Hart.  I enjoyed him, as did several hundred other people who met him over the weekend.
Sadly, Hart announced he is battling prostate cancer.  Hopefully, this is just one more obstacle for Hart to overcome.  My prayers are with "The Hitman." 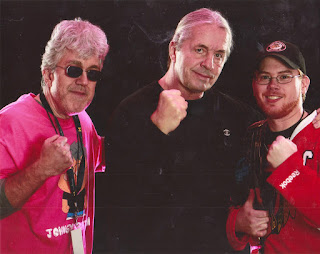 Bret Hart, Jason Fleigel and me in Schaumburg, IL-November 2015.
Posted by Johngy at 6:00 AM