Johngy's Beat Contributor Deluxe is back with his "Cuzz Buzz."  Today he is revisiting our encounter with Jill Marie Jones at Flashback Weekend 2016.

Jill Marie Jones is probably best known for playing the character Toni Childs on the popular UPN television series Girlfriends from 2000-2006. She’s also appeared in several films including The Perfect Holiday with Queen Latifah and Major Movie Star with Jessica Simpson. The former Dallas Cowboys cheerleader also had a recurring role in the Fox supernatural series Sleepy Hollow and is currently starring in the Starz horror comedy series, Ash vs Evil Dead developed by Sam Raimi.
Johngy and I had the opportunity to chat with the beautiful and talented actress at Flashback Weekend in 2016. Jones commented how much she enjoyed playing the role of Toni, a self-centered but good natured friend to her three co-stars, Tracie Ellis Ross, Golden Brooks and Persia White.  She was nominated for best supporting actress in a comedy series by both the BET awards and the NAACP Image awards. Jones said she still keeps in touch with her co-stars but a potential reunion show appears to be mired with legal issues.
It was a pleasure to meet Jill Marie as she was gracious and friendly and appeared to truly enjoy interacting with fans at the convention. 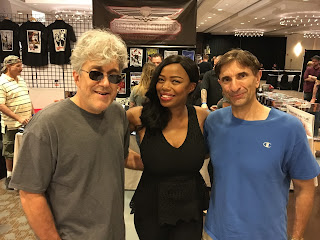