I have completed my third season of covering the Chicago Bandits.  Each year seems to get more enjoyable.  I cannot say enough good things about everyone involved and the organization as a whole.
It all starts with owner Bill Sokolis.  Bill's deep love for the game, the players and the fans is palpable.  He has made me feel like a member of the Bandits family right from the start.
General Manager Aaron Moore wears more hats than I even can count.  From scouting the future Bandits to overseeing all on game day, Aaron is omnipresent.  I appreciate all he has done for me, including unprecedented access.
In my other life, I own/run Arch News Agency, a printed materials distribution company.  Last winter, I talked to Aaron about distributing the Bandits schedules.  We had a good run with that this season and the plan is to do even more next season.  I believe in the Bandits and am happy to help them in any way.
There are so many other great people, such as Johnny Sole, Jason Lowenthal, Dina Kwit, Irwin Shiffman, Sam Viebrock and the interns and other staffers, including Swiper, of course.  Plus, the many great fans of Bandit Nation, like Sheri Samson, Chris Bejcek, Mark Pandocchi, CA Stevens, Tony Feddeler, the Marshall Family and more.  I must also mention the supporters from afar, like the Blank family (who sent me the cool bobblehead).  Believe me, I appreciate each person and each kind word.
I am also thankful for the many great members of the Johngy's Beat crew this season.  Jack Keenan has been a great help from day one, but he missed time this year being in the hospital.  In his absence, Peter Atsaves, Christopher Atsaves, Cuzz Gekas and Charles Alexander filled in admirably.  I couldn't have done it without them.
I am already looking forward to next season.  I am planning ultiple road trips and even more ways to cover and promote the Bandits.  I'll periodically still run news on the Bandits here during the offseason, but you can also check out ChicagoBandits.com for all the news and updates. 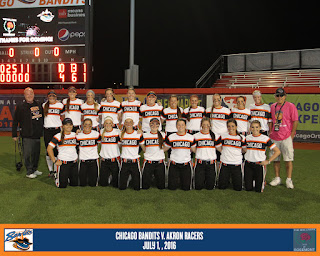