Johngy's Beat Contributor Cuzz Gekas recently was back on the beat and will be giving his accounts of several celebrity encounters.  Stay tuned here for Cuzz Buzz!

Kevin Sorbo was born and raised in Mound, Minnesota and was a star athlete at Minnesota State University Moorhead before gravitating to a career in acting. He got his breakthrough role staring as the title character in the popular television series Hercules: The Legendary Journeys which ran from 1995-1999. He followed that up playing Captain Dylan Hunt, the lead role in the science fiction drama series Andromeda from 2000 to 2005. While he continues to act in a variety of projects, Sorbo has also recently appeared in a number of faith based films including What If, Soul Surfer, Abel’s Field, Jesus and Mary and the 2014 hit God’s Not Dead.
Johngy and I had the opportunity to chat with Sorbo at the 2016 Wizard World convention in Columbus, Ohio. Sorbo stated that as a Christian, he likes the idea of making faith based films provided the script and production are of high quality. He believes the caliber of these types of films has improved over the years and there’s clearly an audience wanting to see them.
Sorbo’s prior success and physical presence allow him to continue to star in action and adventure films. However, he has proven his versatility by also being successful in an entirely different genre. Sorbo is currently working on another faith based film; Let There Be Light which is scheduled for release in Christmas, 2017.
For more info on Sorbo, check out KevinSorbo.com.  You can also look for him at various Wizard World conventions around the country. 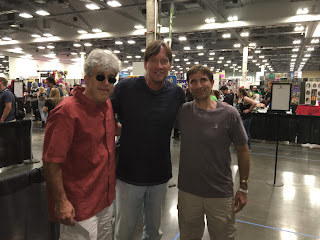