Cuzz Buzz: William Zabka at Days of the Dead Indianapolis 2016

Johngy's Beat Contributor Cuzz Gekas is back again with his "Cuzz Buzz."  This time, he is recapping our encounter with William Zabka at the Days of the Dead Indianapolis 2016.

The Karate Kid was released in theatres in 1984 and became an instant hit with movie goers across the country. The movie remains popular to this day and spawned several sequels and even an ill-fated remake in 2010. The story revolves around Daniel Larusso (Ralph Macchio) a teenager who relocates with his mother from New Jersey to California. There he becomes the target of bullies, until wise old Mr. Miyagi (Pat Morita) teaches him self-defense and some valuable life lessons. William Zabka played the role of “Johnny”, the lead antagonist of Daniel’s tormentors from the Cobra Kai Karate dojo. Johngy and I had the opportunity to meet Zabka at the 2016 Indianapolis Days of the Dead convention. He was friendly and outgoing as he discussed his role in the movie and other recent endeavors.
Although, he was an accomplished wrestler in high school, Zabka had no martial arts experience prior to the film. Through training he became proficient in the art of Tang So Do which he continues to practice even today.   Zabka talked about the climatic final fight scene between him and Macchio, choreographed in great detail by Pat Johnson, a ninth degree black belt and stunt coordinator for the film (and also the referee in that scene). These days Zabka remains active as a writer, director and independent film maker. He was nominated for an Oscar in 2004 for Best Short Film; Live Action (“Most”) and has directed music videos for several bands including Rascal Flatts. He continues to act on occasion appearing in the movie Hot Tub Time Machine and reprising the role of Johnny in several episodes of the TV series How I Met Your Mother. Many actors scoff at a single role that brought them fame, but Zabka to his credit, seems to have embraced his contribution to a classic film from over 30 years ago. 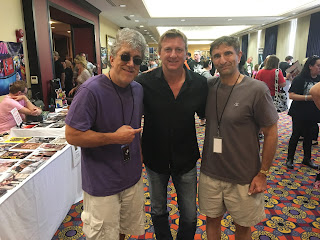