Cards That Never Were is a recurring series in which I create virtual cards for players who were missed in the original Topps card sets.  It is a concept I have borrowed from too many others to list, but I thank and appreciate them all.
Paul Popovich was a middle infielder for 11 seasons.  He debuted with the Chicago Cubs in 1964 with one game and reappeared for 2 games in 1966.  He stayed with the Cubs through 1967, before being traded to the Los Angeles Dodgers, where he played a season and half.  In mid-1969, he was traded back to the Cubs, where he stayed until being traded to the Pittsburgh Pirates after the 1973 season.  He was released by the Pirates in July of 1975.
Popovich had Topps cards from 1967 through 1975.  His one game in 1964 did not merit a card in 1965 and I will actually let that go (because I could not find that old of a picture of Pop).  Even though his 1975 season (and career) ended in July, I felt compelled to give him a 1976 card, which would be a career capper.  I think the picture works well with the feel of that set.
As I always mention, the 1976 set has a special place in my heart.  It was the first set I ever bought complete.  I actually completed the 1975 set, but that took many pack purchases to get the final cards (Mario Mendoza and Danny Cater were two of the final cards needed, I recall).  In the event of questionable card offerings, I will always lean towards doing one if it is a 1976 card 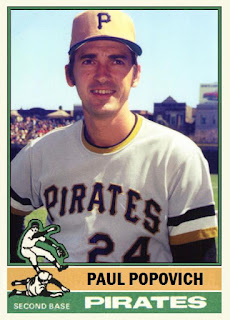 That is a perfect card.