Born in Brooklyn, New York, Mary Tyler Moore became connected to Minneapolis from "The Mary Tyler Moore Show," which was set there.  There is even a statue of her in her iconic hat-tossing pose in downtown Minneapolis.  I love that her pose is also captured on her Celebrity Jersey Card!  I am assuming her #1 jersey is just respect for her and not for any Twins player. 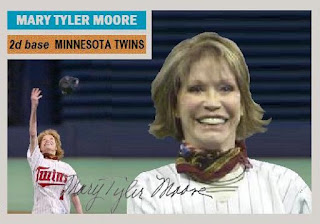 In Little Big League, John Ashton plays the manager of the Twins.  A lot of managers have catching backgrounds and that is where I listed him on his Celebrity Jersey Card.  I could have given him a Manager card, since Topps had them in 1974, but then I would have fretted over the floating coaches heads.  Luke Edwards also appears on his card. 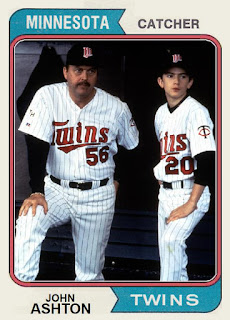