This is a recurring series in which I create cards for players who were missed in the sports card set from that year.  It is a concept I have borrowed from far too many others to name, but I appreciate them all.
Bill Bennett comes from a hockey family.  His father Harvey played in the NHL, as did his brothers Harvey Jr. and Curt.  Another brother John played in the WHA.
Bill debuted with the Boston Bruins during the 1978-79 season.  He played the next season with the Hartford Whalers.  His NHL career was over, but he played two more seasons in the minor leagues.
Bill received no hockey cards for his efforts during those two seasons in the NHL.  Back then, less than half of the players received cards.  With 31 games and 4 goals total, it is understandable that Bill did not merit a hockey card for those years.  That doesn't stop me from creating virtual cards for him.
The first card fits well with that set.  The second card's all white background doesn't work too well, but that was the only picture I could find and it does the trick. 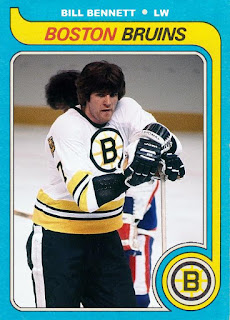 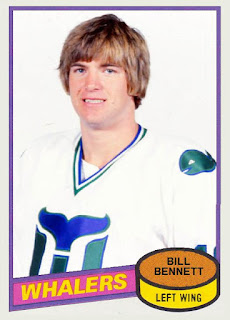