This is a weekly series which attempts to combine my lifelong interest in sports trading cards with my semi-professional interest in celebrities.  I continue celebrating the Chicago Cubs.

Broadcaster Craig Sager was born near Chicago and graduated from Northwestern.  His lengthy career speaks of his talent, but his courageous battle with leukemia speaks of the man.  He has continued to work and to prove that the disease will not beat him, even if it eventually takes his life.  This Celebrity Jersey Card honors Sager at his best and happiest! 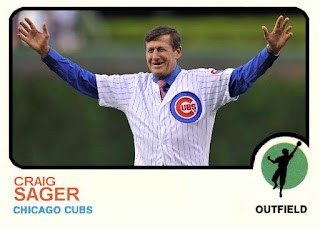 California native and Colorado resident Craig Stadler has had a great golf career.  He won the Masters Tournament, along with many other tournaments and awards.  "The Walrus" earns extra points for wearing a Cubs hat for his Celebrity Jersey Card! 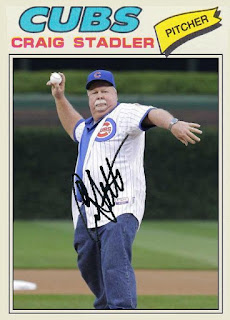