Singer-songwriter Samantha Newark might be best known for her voice-over work as the speaking voice of Jem and Jerrica in Jem, the animated cartoon series.  That role started in 1985 and lasted for 65 episodes.  Thirty years later, it is still popular.  Although a singer, Newark did not do the singing for Jem, because that was decided before she auditioned.
Sara Richard is one of may favorite artists.  Her resume is lengthy (including doing her tae on the "Johngy" character).  Sara met Nwark at San Diego Comic Con.  There was more to this meeting than just two celebs.  The connection is that Sara has done cover artwork for Jem and is a big fan of Newark.
On her website and all over social media, Sara expressed her excitement at meeting Newark.  I always enjoy seeing star's reactions to meeting their favorites.  Clearly, this was one of Sara's favorites.
For those unfamiliar with Sara and her art, check out SaraRichard.com.  She is so talented.  She is also just a cool person.  She has a real enthusiasm for her work and for life in general.  It's always fun following her online, too.  You can follow her at Sara Richard on twitter. 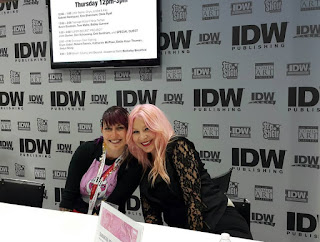 Sara Richard and Samantha Newark in San Diego, CA-July 2015.
Posted by Johngy at 6:00 AM