This regular series is a simple concept.  I see a picture of a celebrity wearing a sports jersey and I create a virtual trading card of it.  After riding along with the Cubs in their championship run, we turn our attention to football, specifically the Bears game, represented by two children of ex-athletes.

Brittney Payton is the daughter of NFL Hall of Famer Walter Payton.  Brittney is making a name for herself doing various television projects.  Talented and likeable, Brittney appears to have a bright future in the business.  For her Celebrity Jersey Card, the daughter of #34 wore a #00 Bears jersey. 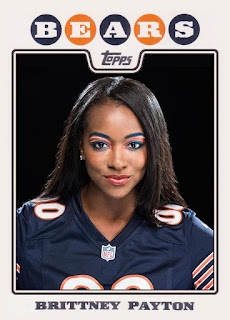 Shannon Magrane's father Joe pitched in the major leagues for 8 seasons, including his last season with the Chicago White Sox.  Shannon is a talented singer, who appeared on American Idol in 2012, finishing 11th.  While her father wore #41, #32 and #34, Shannon is seen wearing #12 (Trent Dilfer?) on her Celebrity Jersey Card. 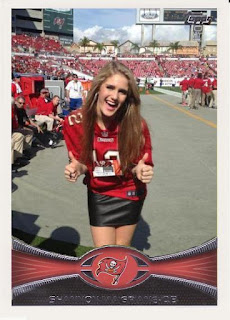