Most people fondly recall actor Michael Gross for his role as Michael Keaton on tv's Family Ties.  Of course my bud Jack knows of that role, but his favorite Gross role was as William Matix in the true life movie In the Line of Duty: The F.B.I. Murders.  Jack and I talked to Gross about both roles and more when we saw him at the recent REWind Con.
Gross is a talented actor, but in real life, he is much closer to Keaton than to Matix.  He did enjoy the acting stretch of playing Matix though.  This really tells of the talent that Gross has.
Gross has done a lot of other projects besides these two, including a stint on The Young & Restless.  He's done spots on episodic television, voice work, movies and more.  Another big role was as Burt Gummer in the Tremors franchise.
He talked to us about Tremors 6, which he stated is in development already.  That is exciting news.  Gross was so popular in that role, that the focus of the movie has shifted to him from the group of characters in the original.
Gross is a class act and one of the true nice guys.  We also talked a bit about his sister Mary, who is doing well, although not acting as uch right now.
Here's one last footnote.  Gross and his Family Ties wife Meredith Baxter have the same exact birthday!
Thank you to Gross for his time and thanks to REWind Con for setting the stage for this.  In the next several days, I'll be recapping several other celebrity encounters from REWnd Con. 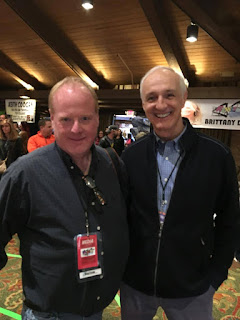 Jack Keenan and Michael Gross in Bloomingdale, IL-November 2016.
Posted by Johngy at 6:00 AM