This is a regular series in which I create virtual trading cards for celebrities spotted in sports jerseys.  Today, I present two champions to honor the 2016 MLB champion Chicago Cubs.

Ric Flair is generally credited with winnin the most World titles in professional history.  That number could be anywhere from 16 to 22 (and possibly more.  The pre-internet stats of pro wrestling can be a bit sketchy.  The highly decorated Falir was born in Tennessee, but raised in Minnesota.  Chicago has always been one of Flair's favorite cities.  His daughter Charlotte and a WWE title belt, accompany The Nature Boy on his Celebrity Jersey Card. 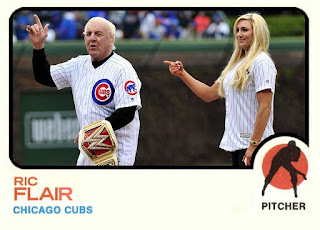 Ashley Flair was born in Charlotte, NC and adopted that name as her in-ring name.  Charlotte has already won the WWE Woman's title 3 times, along with winning the WWE Divas title once and the WWE NXT Women's title once.  You might say she has inherited her father's "flair" for the gold.  Her Hall of Fame father joins Charlotte on her Celebrity Jersey Card. 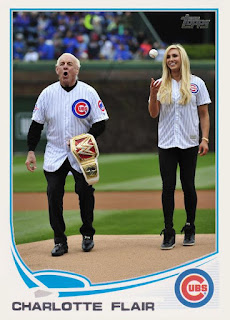