Cards That Never Were is a recurring series where I create virtual cards for players who were missed in various sets over the years.  It is a concept I borrowed from too many others to list, but I appreciate them all.
Wide Receiver Barry Pearson was drafted by the Pittsburgh Steelers in 1971.  He got into only 2 games in 1972 and did not have any stats.  He saw more action in 1973, but then was traded to the Kansas City Chiefs, for whom he spent three more seasons, although he did not have any stats for the 1976 season.
Topps saw fit to give Pearson cards in the 1974-76 sets, skipping him in the 1972 and 1976 no stats years.  While I cannot blame Topps for leaving him out of those sets, I could not resist giving him a card for the 1977 set, when I found a nice shot of him on the sidelines during his time with the Chiefs.
I think it is fitting that it is a sideline shot, since he might not have seen any action in 1976.  I also think it fit with the feel of that set. 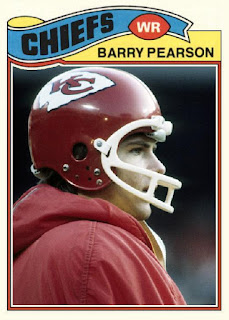