Eric Joseph Larkin has met a ton of wrestlers.  One of the youngest has to be Crazy Mary Dobson, who he met when she was 20 (or younger?) at Resistance Pro.
EJL is one of the good guys.  Obviously he is a huge wrestling fan, but he isn't an obnoxious fan and he is always respectful to the wrestling talent.  He's a welcome fan at any RPro event (and he attends a lot of them).
Crazy Mary Dobson was one of the best in an RPro ring.  Unfortunately for RPro fans, she has moved onto the big time at the WWE.  That's really just the nature of the business for independent companies.  The exceptional wrestlers usually move up to the bigger companies (WWE or TNA).
She's not the first to move on from RPro to a bigger stage, but she might have the best future.  I have seen her improve over her time at RPro.  I have also seen her work incredibly hard at improving her skills, as well as overall training.  I dare say, in a legit fight, I wouldn't bet against her even against some men.
She's a class act and I wish her nothing but the best.  I'm sure we will see a lot of her on WWE television going forward.  That WWE title belt will look good around her waist.
I'm also sure I will see EJL at future RPro events and that's also a good thing.  You can always count on seeing good frends and familiar faces at RPro. 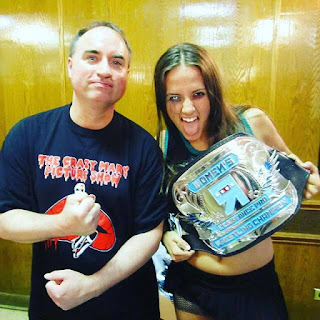 Eric Joseph Larkin and Crazy Mary Dobson in Summit, IL-December 2015.
Posted by Johngy at 6:00 AM