This is a regular series where I create virtual trading cards for celebrities wearing sports jerseys.  Again we feature the Chicago Bears game.  Go Lions!  #BetterDraftPick

Kelly Hall met Matt Stafford while they were both students at the University of George.  Matt went on to be a pretty good quarterback with the Detroit Lions, while Kelly has gone on to do some modelling and acting.  I'm guessing her jersey is Matt's #9 and I give her extra points for the Lions hat. 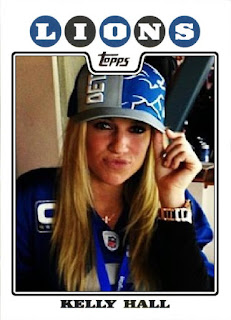 Musician Patrick Stmp was born just outside of Chicago, in Evanston, IL.  Best known for his work in Fall Out Boy, Stump has also found success as a solo act, as well as in other projects.  For his Celebrity Jersey Card, his coat is most covering his #35 (Anthony Thomas?) jersey, but it's cold in Chicago and we can forgive that. 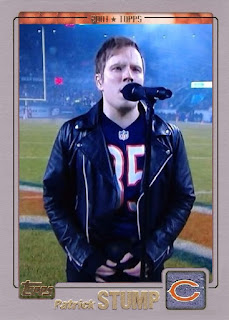