Here's my comic con buddy Eugene Cresto again.  This time he is with Michael J. Fox, one of my favorites and truly a special person.  Euegene is special, too, but don't tell him I said that.  It'll go right to his head.
Eugene and I have a parallel comic con life, although he tends to beat me on bigger names, like Fix.  In fact, it was this pic with Fox that inspired me to make sure I met him at Chicago Wizard World.  I was not being competuitive or petty (for once).
I saw this picture of Eugene and Fox and I realized that I had to meet Fox.  You can spend your time and money at comic cons meeting other celebrities or you can focus all on meeting your favorites.  It is time for me to choose quality over quantity.  In other words, I won't let an opportunity like meeting Fox pass.  He's just too much of a favorite.
Usually, I jokingly chide Eugene for beating me to a celebrity.  Today I am thanking him for really being the reason I met Fox this year.
As for Fox, his condition is not a secret.  The man suffers from Parkinson's Disease.  He raises awareness for the disease with his appearances.  I am sure sittting there for hours of photo ops isn't easy, but Fox remained friendly and personable throughout the weekend.  Of course, he made good money doing such, but that does not make it any easier.
Kudos to Eugene for meeting Fox.  Kudos to Fox for making these appearances.  Kudos for Wizard World making this all happen. 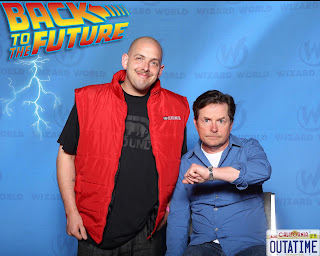 Eugene Cresto and Michael J. Fox in Philadelphia, PA-June 2016.
Posted by Johngy at 6:00 AM

Such a sad disease for Michael J. Fox. So cool that he still gets out there!!