This is a weekly series where I try to combine my lifelong interest in trading cards with my semi-professional interest in celebrities.  Once again, I feature the matchup for the Chicago Bears game.

Golfer Paula Creamer was born about 30 miles out of San Francisco, CA and she remains a big fan of the San Francisco 49ers.  While she has never been ranked #1 for a year, she has finished in the top 10 five times.  She owns a lot of team gear, but for Creamer's Celebrity Jersey Card debut, she is wearing her customized 1 jersey. 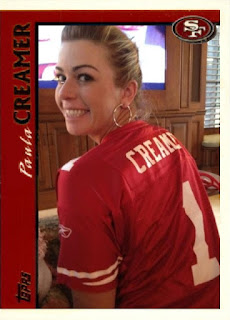 Geotrge Wendt has previously appeared here in a Tampa Rays jersey and a Chicago Blackhawks jersey.  Today, Wendt scores his third sport, by appearing on a Celebrity Jersey Card in a Chicago Bears uniform.  It is from his role as "Bill Swerski" in the famous Saturday Night Live skit.  Obvious, in homage to "da Coach," whose jersey he is wearing, he is listed as a Tight End. 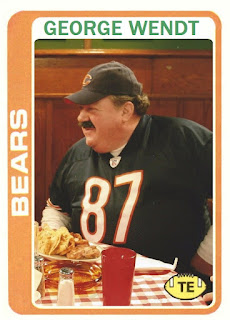