TNA Wrestling had a tough year in 2016.  One of the highlights for me though, was seeing Marshe Rockett make his debut.
I met Marshe at Resistance Pro Wrestling, where he was part of Da Soul Touchaz.  He went on to eventually capture the RPro Heavyweight title.
Having been at RPro from the beginning, I had the pleasure of watching Marshe progress up the card.  I got to see him work very hard at honing his craft in and out of the ring.  Watching him, you got the feeling he was destined to reach the big time.
Marshe was no secret though.  Da Soul Touchaz and Marshe were well known on the indy scene.  It shouldn't be a surprise that Marshe reached one of the big two wrestling companies.
Marshe was always great to me at RPro.  He always found time for our interviews and he always gave good ones.  Like I wrote earlier, he was a real pleasure.
Now it is a pleasure watching him in TNA.  Hopefully, the company will have a better 2017 and hopefully Marshe will be a big part of it. 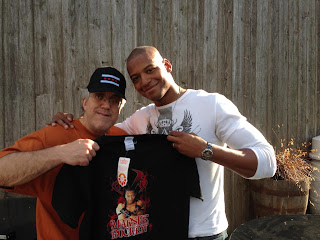