Friday night, I was back on the Beat with the Windy City Rollers.  All four teams of the WCR were competing for the JRC championship.  My full recap can be found on the Patch at On the Beat at the 2017 Juanna Rumbel Cup.
Hell's Belles won the Juanna Rumble Cup via a 91-82 victory over The Manic Attackers.  This bout was competitive and exciting from beginning to end.  It was a relatively low-scoring battle, with both teams under the 100 point mark, but that did not detract from the fun.  The game was just hard-fought, well-played, smash-mouth.
There is a lot of beauty in such a game.  It was roller derby at its finest and I was glued to the action.  In roller derby, you don't need a lot of scoring to have a lot of action.
The Juanna Rumbel Cup MVP was Bambi Bloodlust.  I had just met her earlier in the night.  Little did I know I was posing with the future MVP!  The best part is she was as nice as could be.  That doesn't surprise me though.  All of the WCR athletes are very fan-friendly.
I'll be covering the Windy City Rollers all season.  I'll be sprinkling in WCR stories here and on the Patch.  In between my reports, you can follow the WCR at WindyCityRollers.com, the WCR Facebook page and the WCR on twitter.
Thank you to the WCR for their hospitality.  I can't wait for the next WCR night of fun! 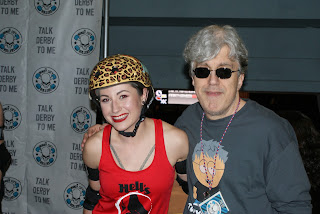 Bambi Bloodlust and me in Chicago, IL-February 2017.
Posted by Johngy at 6:00 AM