Whether chasing down her favorite rock stars, managing her latest wrestling talent, handing dj duties at RPro or just hanging out, Erin is always in the middle of the action.  Honestly, is she not the coolest?
I first saw Erin years ago at an indy wrestling event.  She was working her magic with some tag team, if memory serves correctly.  Years later, I found myself working with her at Resistance Pro.  I still think she is the coolest.
I don't know how she meets so many rock stars though and she doesn't reveal her secrets.  Actually, she doesn't reveal much.  She has had an interesting career in wrestling.  She has seen a lot and been involved in a lot.  I have tried to interview her, but she politely declines.  Her stated reason is that she is afraid of what will come out of her mouth, which is the exact reason I would love to interview her.
Erin took a picture with The Edge of U2 fame.  I don't think she ever took a picture with Edge of wrestling fame.  That would be a cool combo.  If anyone could pull it off, it would be Erin, but don't expect her to tell you how! 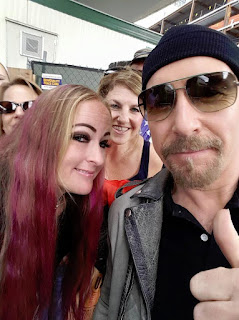