This is a regular series where I create virtual trading cards for jersey-clad celebrities.  Today, we feature reps for the Super Bowl participants.

Steven Anderson was born in Texas, but Stone Cold Steve Austin was born in a WWE wrestling ring.  Technically, "Stone Cold" was born in his kitchen during a conversation with his then-wife.  Retired from in-ring competition, Stone Cold makes the occasional appearance for the WWE.  The Hall of Famer had a brilliant run and will forever be known for his infamous and impromptu "Austin 3:16" speech. He gets extra points for having three digits on his Celebrity Jersey Card (ironically, it is his flipping of his single digit that is also a SCSA trademark). 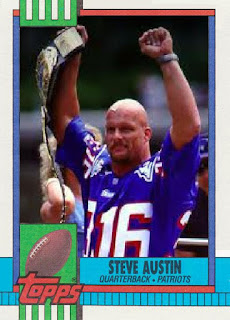 The Zac Brown Band is based in Atlanta, GA and they stuck close to their roots by donning the Falcons jersey while they performed the National Anthem at a game.  Zac is obviously the leader and therefore he gets the billing on this Celebrity Jersey Card. 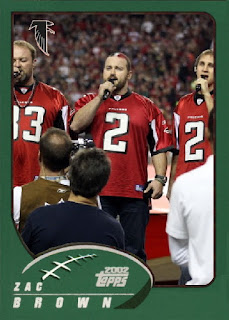