This is Mascot Week.  All week. I shall be featuring some of my favorite mascots, starting with a very special one.

I attended DePaul University for four years, but I never met the Blue Demons mascot.  That momentous occasion occurred some 30 years later at a Chicago Bandits game.  The Bandits had a "Mascot Day" and it is perfect to lead off my Mascot Week.
Back in my day, I think the mascot was named Barney.  At some point in the last few years, the mascot got a makeover.  The thought was to make him appear edguer, perhaps even fiercer.  The result was Dibs.
Dibs actually stands for Demon in a blue suit.  I'm not really sold on that acronym.  Doesn't stating that it is a blue suit take away from the mascotness of the whole thing?  I know, we all know it is someone in a suit, but why announce that?  Also, isn't that a bit clunky when explaining it to kids, who are probably the biggest fans of the mascot?
It just seems unnecessarily complicated in an attempt to be clever.  I give that part a giant fail.
I do like the look of Dibs though.  It is a darker blue than the previous mascot.  The face is less goofy, if there is such a comparative among mascots.
Enjoy the rest of the week of mascots.  I know I enjoyed meeting them all. 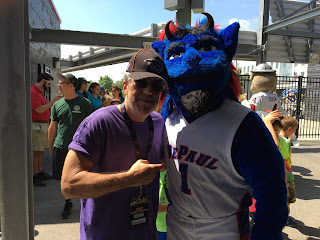