Although I did not see an official NPF or team announcement, Roman Foore mentioned on Facebook that he is leaving the Chicago bandits organization.  This is another tough loss for the team and the fans.
Roman has an extensive and successful softball background.  In addition to his stint with the Bandits, he has played for the United States Men’s National Fastpitch Team.  He has coached at Appalachian State and the University of St. Thomas, as well as Eagan (MN) High School and independent fastpitch teams.  After the 2016 NPF season, he joined Arizona State University as an Assistant Coach.
Roman was a vital cog in the championship runs of the Bandits.  I saw him work tirelessly with the players and his efforts certainly paid off.  He was respected by the organiztion, the fans and me.
He always gave great interviews, even when I occasionally delved into more light-hearted topics, like the Mustache Club or my push to have him named as the GM the Minnesota Twins.  Roman went along with it and gave me great answers.
It was a pleasure knowing Roman and seeing him around the ballpark.  I wish him nothing but luck and I will be following the ASU Sun Devils because of him.  Thank you Roman.  You will be missed. 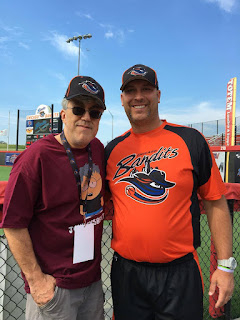