Celebrity Jersey Cards is a weekly series in which I create virtual trading cards for celebrities seen wearing sports jerseys.  As baseball season approaches, I am featuring the MLB champion Chicago Cubs!

The legendary Richard Pryor was born in Peoria, IL and earned his Celebrity Jersey card from his performance in Brewster's Millions.  Pryor actually looks very natural in the uniform.  I could see him as a reliever from the late 60's. 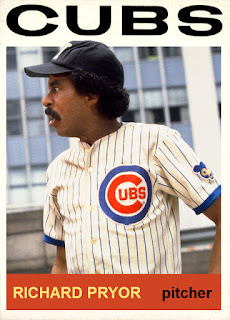 Comedian Chelsea Handler was born in New Jersey.  Among her many credits is the highly successful Chelsea Lately, which ran from 2007-2014.  She showed pretty good form is tossing the first pitch at Wrigley Field leading to her Celebrity Jersey Card.  She gets extra points for wearing the Cubs hat, too. 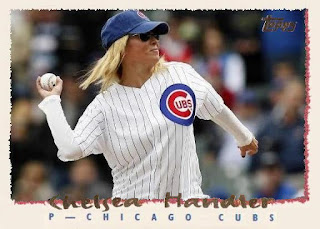 Chelsea looks like she's going to throw some sort of palm ball. BTW I don't know if there have been others in your "set" but Chelsea did make a First Pitch appearance for Topps in 2015, also at Wrigley.