This is a regular series which attempts to combine my lifelong passion for trading cards with my semi-professional interest in celebrities. With baseball seasonb upon us, once again, we will work our way alphabetically through Major League Baseball.

Swimmer and seven-time Olympic medalist Amanda Beard was born in Newport Beach, CA.  Beard earned the American Swimmer of the Year Award twice and has won a total of twenty-one medals in major international competition.  I'm guessing from her expression that her pitch attempt might not have been medal-worthy.  Still, it was good enough to earn her a Celebrity Jersey Card.. 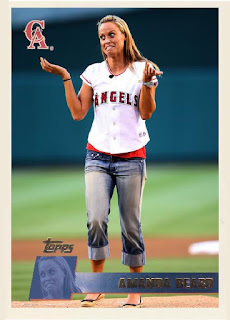 Actor Adrien Brody was born in New York, but he earned his Celebrity Jersey Card from his appearance in Angels in the Outfield.  It was his role in The Pianist, for which he won the Academy Award for Best Actor, making him the youngest to ever win the Best Actor award. 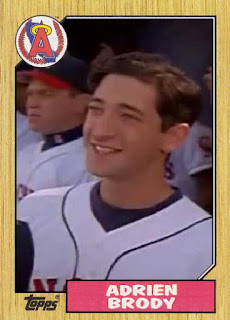