I credit the eagle eye of Cuzz Gekas for spotting and recognizing Brenda Strong at the Motor City Comic Con last year.  While she might be best known for her role on television's Desperate Housewives, it was her portrayal of Sue Ellen Miscke on Seinfeld which put her on our radar.  I've met a few Seinfeld characters, including Lee Arenberg at an earlier MCCC.
As we walked through "Celebrity Alley," Cuzz spotted "the braless wonder," as she was called on Seinfeld.  I had to add Strong to my Seinfeld collection.
Strong has a lengthy resume going back to a role on tv's St. Elsewhere.  She's had regular roles on such shows as Party of Five, 7th Heaven and Twin Peaks, just to name a few.
I'm sure other fans asked about her many other roles, but Cuzz and I focused on her Seinfeld part.  Strong was really sweet and went along with our Seinfeld questions.  She even went the extra step in the photo by emerging from her booth.  That little gesture goes a long way in memories of meeting celebrities.
Recently, you could see Strong on tv's Supergirl, where she plays Lillian Luthor.  She also has a couple other projects in various stages of development.
You can follow Brenda Strong on twitter.  She is pretty active there, posting fun pictures and updates. 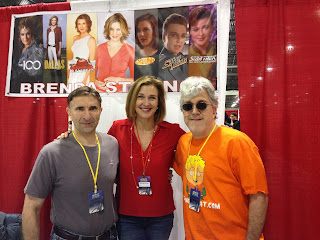 Even more than Seinfeld, I will always associate her with one of my all time favorite shows, Sports Night, where she played the scheming Sally Saaser. And I LOVE that she's now playing a Supergirl villain, because of this exchange from that show:

Don't do it, Casey, she's got an
agenda.

You think she wants a job on Sports
Night?

No, I think she wants to rule all of
Metropolis.

In my head canon, Lillian Luthor IS Sally Sasser. (The alliteration gives it away.) Dan Rydell was right!