This is a weekly series in which I create virtual trading cards for celebrities wearing sports jerseys. We continue to work our way alphabetically through Major League Baseball.

Actor Richard Crenna was born in Los Angeles, CA, but he earned his Celebrity Jersey Cardby donning the uniform of the St. Louis Cardinals for his role as Paul Dean in The Pride of St. Louis.  Paul was the younger and less successful brother of Dizzy Dean, the main focus of the movie.  Crenna's career spanned over 60 years.  He is joined by his co-stars Dan Dailey and Joanne Dru (sister of Peter Marshall and aunt of former player Pete LaCock).  Crenna passed away in 2003. 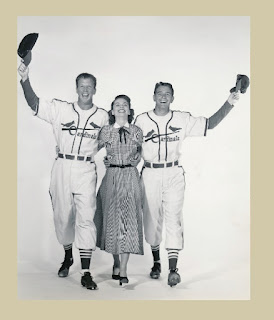 Dan Dailey was born in New York and was in entertainment most of his life.  He earns a solo appearance on his Celebrity Jersey Card, but also from The Pride of St. Louis.  Dailey earned rave reviews for his performance as Hall of Fame pitcher Dizzy Dean.  Unfortunately, Dailey passed away in 1978 at the relatively young age of 62. 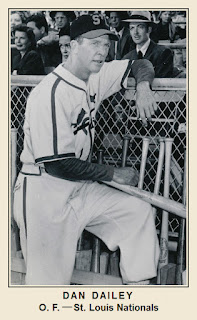