The people in the photo below have seven league titles.  Kim Perez and Dominique Collins have three each with the three time Legends Football Lague champion Chicago Bliss, while Kam Chancellor has one with the NFL 2013 champ Seattle Seahawks.  All three people also play safety for their respective teams.
All three are champs and all three are stars.  All three are also feared hard hitters.  Pound for pound, I might tyake Kim and DC over Kam.  Anyone, who thinks thes ladies are just eye candy on a field, has never seen these ladies hit.  They are fierce.  I am sure they even earned the respect of Kam when he attended their game in Seattle against the Mist.
Anyway you look at it, there is a lot of talent in that picture.   don't know Kam, but if he is half as nice as Kim and DC, he'd be a pretty cool guy.
The Chicago Bliss currently stand at 1-0 after thrashing the Denver Dream 93-6.  Their next game is Saturday, June 3 against the tough Atlanta Steam.  This is one you don't want to miss.
You can check out Kim, DC and the rest of the Chicago Bliss at LFLUS.com.  Better yet, go to a game and see how tough these ladies are on the field and how sweet they are off the field. 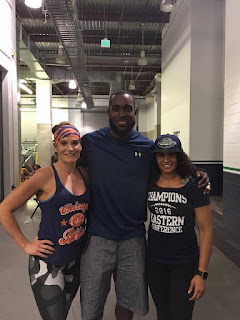 Kim Perez, Kam Chancellor and Dominique Collins in Kent, WA-August 2016.
Posted by Johngy at 6:00 AM