The Chicago Bandits lost to the USSSA Pride in the National Pro Fastpitch playoffs to end their 2017 season.  They battled until the end, but they came up just a bit short.
Despite the early exit from the playoffs, the Bandits had a successful season considering all that happened.  In the season of change (owner, GM, manager, coaches, players etc), the Bandits hung tough and played exciting softball all season.  They finished in 4th place with a record of 25-24, 1/2 game behind the Akron Racers for 3rd place.
Once again, I was fortunate enough to interview everyone on the team (except for Danielle O'Toole, who only made 3 appearances due to her Team USA commitments).  Those interviews (and the previous 3 years of interviews with the Bandits) can be found at Johngy's Beat Chicago Bandits YouTube playlist.
I want to thank everyone involved with the Bandits for their hospitality and friendship.  It starts at the top with GM Toni Calmeyn.  Director of Media Relations Jason Lowenthal was extremely cooperative in facilitating our interviews.  Broadcaster Mike Knezevich and PA announcer Doug Meffley always welcomed me in the booth.  Shifty Shiffman gave us plenty of news and good stories from the past and present.  Jourdan Skirha and the in-game entertainment crew were a lot of fun and they didn't kick me out of their bullpen area.  Bandit Nation's Sheri Samson, Mark Pandocchi, CA Stevens, Chris Bejcek, Kevin Mooney, Jonathan Cimaglio and all others welcomed me into their fold.  Many parents of the Bandits befriended and supported me in my efforts.  The Aussie contingent shared and supported our interviews.
Lastly, thanks to the Bandits.  These ladies are not only elite athletes, but wonderful young women.  Thank you Shelby Turnier, Danielle O'Toole, Ellen Roberts, Lacey Waldrop, Kaia Parnaby, Sierra Hyland, Haylie Wagner, Breanna Wonderly, Taylore Fuller, Taylah Tsitsikronis, Sahvanna Jaquish, Megan Blank, Emily Carosone, Kristen Brown, Abby Ramirez, Natalie Hernandez, Stacey McManus, Stacy May-Johnson, Brenna Moss, Sammy Marshall, Rachel Lack, Samantha Pool, Chelsea Forkin, Danielle Zymkowitz, Emily Crane and Alexa Peterson!
I loved covering this team.  It's been 4 seasons and it keep getting better.  I look forward to more fun in 2018 and hope to see a bunch more friends out there in Rosemont.  For more information check out ChicagoBandits.com.  It's only about 284 days until the 2018 season! 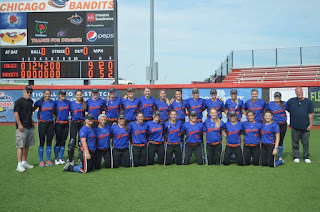