I recently saw Billy Joel in concert at Wrigley Field, my third time seeing hi at this historic venue.  I wrote about this experience for Global Traveler at A Night With Billy Joel.
I have seen Billy Joel in concert over a dozen times.  I have seen him more times than all of my other concerts combined.  I don't generally like concerts, but I make the exception for Billy.
I have been a fan of Billy since the mid-1970's.  If you ask me for my favorite Billy song, I'll probably say "Vienna," but I could easily say about 10 others.  He hasn't put our new rock music in over 20 years, but his music is eternal to me.
Experiencing Billy at Wrigley is something special.  I have seen hundreds of games at Wrigley, but only Billy in concert there.  The same iconic skyline and scoreboard sit behind him on stage.  A breeze off of the lake comes in on occasion.  It is about as peaceful as a moment as I could imagine, yet it is in the middle of a concert mob.  Granted, the Billy crowd isn't exactly rowdy, but a concert is still a "scene" no matter wo is performing.
Each time I see Billy, I recall my early days of discovering him.  Each new album (or each old album) I got was a new treasure.  I also think that each time I see him might be the last time I see him.  I soak it in and commit it to memory.
I don't know how many more concerts Billy will have.  I just know that I will do my best to make sure I am at every one I can make.
Thank you Billy for giving me (and millions of others) so much joy.  I hope to see you in 2018! 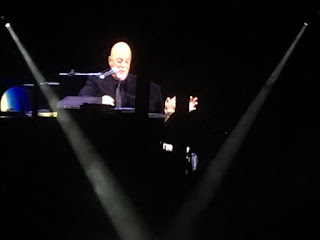 Wish I could have been there. "Piano Man" is somewhere on my list of all-time favorite songs.

I looked at the set list - really solid. Good to see he can still bring it, even if he hasn't released almost any new material in so long.

I hope we can see Billy Joel in 2018 with you again! Will wait to see his schedule! Loved seeing him at Wrigley Field with you last year and a couple of years previously!!

Glad you enjoyed the concert. He does put on a great show.