I first met Mikey Wild several years ago at POWW, a local wrestling organization.  He was one-half of the Threat Level Black tag team (with C.J. Idol).  They were a talented and popular team.
A lot has happened since then.  C.J. got injured and Mikey drifted in and out of POWW, while developing his "American Nightmare" persona.  In the world of pro wrestling gimmicks, the American Nightmare is a pretty cool one.
Obviously, Mikey has a lot of friends in wrestling.  One non-obvious friend though is Christina Von Eerie, a very talented wrestler who has performed for some major companies here and overseas.
I don't have the backstory on their connection, but I know they are good friends.  Earlier this year, CVE appeared at a wrestling show in the Chicago area (which may or may not have been organized by Mikey).  With a couple other wrestlers, Mikey and CVE formed the Monster Squad, a group looking to take over the company and generally cause destruction.
The partnership is an interesting one that works.  CVE has long been one of my favorites in the wrestling ring and she will draw fans.
I love the picture below.  It is just two great friends showing their sadness over parting ways, as she headed back to the west coast after the show.  It may break character a bit for both, but that's not new for Mikey at least.  It's just another facet of his character.
I look forward to seeing what these two do in the future.  Whatever lies ahead is sure to be entertaining. 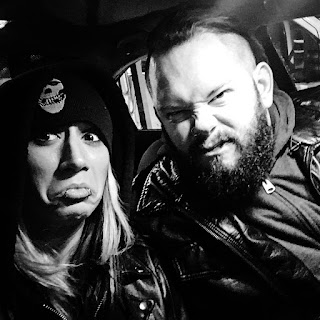 Christina Von Eerie and Mikey Wild in Chicago, IL-May 2017.
Posted by Johngy at 6:00 AM