Leon Durham was born in Cincinnati, OH.  He played Major League Baseball with the St. Louis Cardinals (two stints), Chicago Cubs, Atlanta Braves and Cincinnati Reds.  He played Leon Alexander, a member of the Minnesota Twins, in the movie Little Big League.  That role earned him a Celebrity Jersey Card. 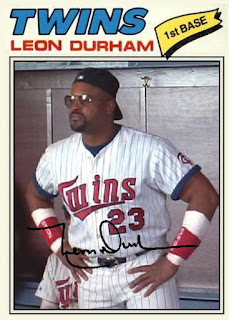 Scott Patterson was born in Philadelphia, PA.  He started out as a pro baseball player, but could did not reach the majors.  Instead, he started an acting carer.  Among his roles was Billy (Elaine's "sponge-worthy" date) on Seinfeld and Mike McGrevey of the Minnesota Twins and a teammate of Durham's in Little Big League.  While he never had an MLB trading card, he now has a Celebrity Jersey Card. 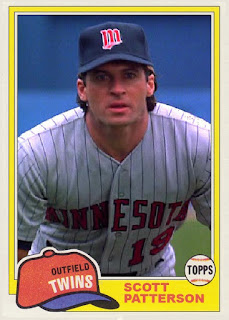 I didn't know that about Scott Patterson. Not that I want to admit watching but he also had a big part on Gilmore Girls.