I met Jonathan Cimaglio at a Chicago Bandits game.  He is an avid sports fan and a big-time autograph collector.  He has a ton of autographs from the Bandits and other teams in the NPF.
He might be the closest rival to Sheri Samson in NPF signatures.  They have a bit of a friendly rivalry going.  I think in time Cimags will surpass Sheri.  I mean no disrespect to Sheri, but Cimags is more of a dedicated "grapher" than Sheri.  Still, this "battle" is fun to watch.  In the end, they are both good people and great fans.
The picture I chose to represent Cimags today is of him and Taylor Edwards, former catcher with the Bandits.  (Why not feature one of my favorite fans with one of my favorite former Bandits?).  It was great seeing Taylor again, but I'd rather have seen her in the blue of the Bandits rather than the red of the Dawgs.
Jonathan's graphing goes well beyond the NPF, too.  He has a ton of baseball signatures.  I bet he is assembling quite a mancave for himself.  It's fun to watch him grow his collection.
This is my first feature of Jonathan, but it won't be my last.  He has so many great pictures with some awesome athletes. 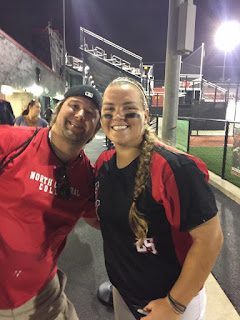 Jonathan Cimaglio and Taylor Edwards in Rosemont, IL-August 2017.
Posted by Johngy at 6:00 AM