The folks at Wrestling Comics are at it again.  This time, they have chronicled the life of Hacksaw Jim Duggan in comic form.  Duggan has led quite a life and Wrestling Comics has captured it all.
Squared Circle Comics, a division of Inverse Press, prepares ongoing authorized biographical comic book series for professional wrestling legends.  Earlier Wrestling Comics have featured Nikolai Volkoff and The Killer Bees.  These issues have been met with great success and praise from the wrestling community and the gans.  More Wrestling Comics are planned for the future, with series currently in pre-production for Bobby Fulton, Lanny Poffo,and Jack Swagger.  All series are written from personal interviews with the wrestlers by wrestling historian John Crowther, and are expertly illustrated by such artists as DC and Marvel mainstays, Dell Barras and Rich Perotta.
John keeps me updated on the latest news.  He messaged me last week about the new comic featuring Hacksaw Jim Duggan.  After a few days, I realized that I already had a connection with Kevin, having met and interviewed him years ago at Wizard World.  You can find that interview at On the Beat With Kevin LaPorte and Amanda Rachels.  It's cool how it all ties together.
There is a Kickstarter page for the Hacksaw Duggan comic.  They have a bunch of different levels of donations, each with cool incentives.  Even a small (but appreciated) donation of $2 gets you a digital (PDF) copy of Hacksaw Jim Duggan Wrestling.  The incentives keep increasing with bigger (but still reasonable) donations.  There are about two more weeks in the campaign.  To learn more about the Jim Duggan wrestling comic (and hopefully contribute to the cause), go to Hacksaw Jim Duggan Comes to Wrestling Comics!  Hooooo! 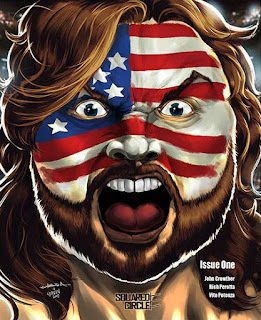 I think these wrestling comics are awesome.  It seems like such a natural fit for the larger-than-life, colorful characters of the ring.  These comics do it perfectly, too.  They take the subject matter seriously, conducting interviews with the wrestlers to get the personal (and accurate) stories. 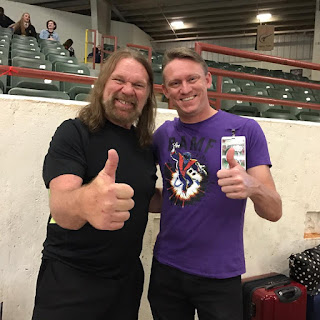 Jim Duggan and Kevin LaPorte in Hattiesburg, MS-October 2017.
Posted by Johngy at 6:00 AM