Celebrity Jersey Cards is a regular series in which I create virtual trading cards for celebs wearing sports jerseys.  Since the Chicago Bears are floundering (again), I am taking a hiatus from football and concentrating on hockey.

Meagan Jacobson is part of the Los Angeles Kings Ice Crew and part of the Game Day Entertainment for the Kings.  A graduate of the University of California Davis and an animal lover, Jacobson studied animal nutrition, animal welfare, animal diseases and animal ethics.  Jacobson's duties for the Kings goes beyond games, as she attends many Kings Care Foundation events and other community programs.  She donned the Kings sweater for her Celebrity Jersey Card debut. 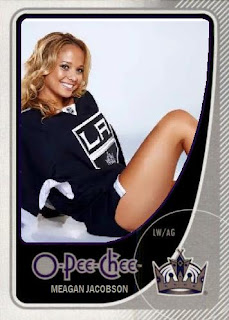 Kristen Keogh is a graduate of Arizona State University, with a degree in broadcast journalism.  She has worked as a news anchor, reporter, weather anchor and television host.  She is a fan of all Arizona sports.  Keogh gets extra points for wearing hockey gloves for her Celebrity Jersey Card. 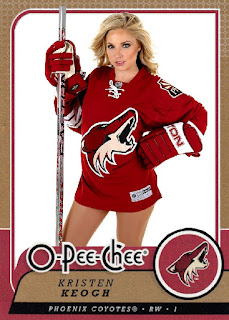