Jonathan Cimaglio is a major autograph collector.  I couldn't even guess how many he has, but it isn't uncommon for him to get fifty or more in a single night.  I've seen him in action at Chicago Bandits games, where he often got both teams.
Obviously, Cimags is a good guy and big sports fan, especially the Bandits.  He's a familiar face around the Ballpark in Rosemont.  The fans and the players know him well.  One such player is three year veteran outfielder Brenna Moss.
Brenna is one of Jonathan's favorites and he is not alone in that thought.  Brenna has been a solid player during her time in the NPF (National Pro Softball).  Last season, she even was in consideration for the Rawlings Gold Glove Award.  You can see many #55 jerseys in the crowd at every game.
Fortunately for Cimags and Bandit Nation, Brenna has already signed to play for the Bandits in 2018.  Unfortunately, Cimags might not be here as he is potentially moving.  I'd hate to see him go.  He's a fun part of the Bandits experience.  We have helped each other with picture-taking at the games.
Brenna was one of the first to resign for 2018.  She is joined by Emily Carosone, Megan Blank and Sammy Marshall.  that's a nice start to the core.  I can't wait for 2018.
For more info on the Bandits, head to ChicagoBandits.com.  Of course, I will also be reporting here on all things Bandits! 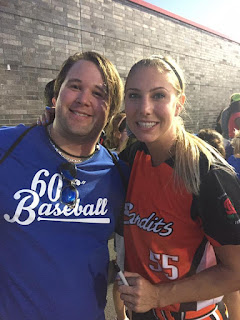 Jonathan Cimaglio and Brenna Moss in Rosemont, IL-July 2017.
Posted by Johngy at 6:00 AM