Born in Canada, Kira Forster now resides in Los Angeles, CA.  This could explain her Oakland Raiders jersey.  She has wrestled in several companies as Taya Valkyrie and has also modeled.  It was during a photo shoot for Impact wrestling that this Celebrity Jersey Card developed.  Although the Raiders have had several players wear #89, there really hasn't been a standout player.  I'd have to go with wide receiver Amari Cooper. 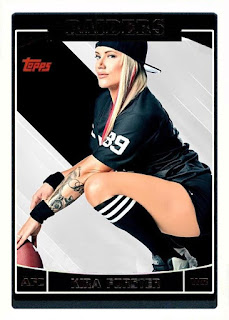 Born in Idaho, Torrie Wilson has been a fitness competitor, model, actress and wrestler.  I believe the jersey was worn for Halloween, but not sure why she picked the Redskins.  She does get extra points for a football and a helmet on her Celebrity Jersey Card.  Many players have worn #26 for the Redskins, but I'd say defensive back Josh Wilson is most fitting. 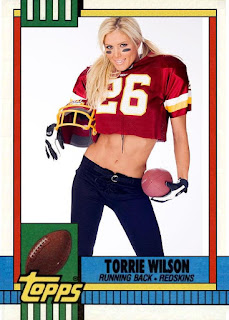 Happy Sunday to us!