To Bliss or Not To Bliss?

My association with the Legends Football League Chicago Bliss started with some interviews at a sports convention.  Alli Alberts and Heather Furr (among others) spoke so highly of the sport, I had to learn more.  One thing led to another, culminating with a trip to Los Angeles to see the Bliss win their second straight LFL championship.
Unfortunately, things unraveled a couple years ago.  The powers that be in the LFL did not want any outside media coverage.  It wasn't just Johngy's Beat, as I saw others rejected, too.
I never understood that stance.  Rejecting Johngy's Beat because it isn't big enough is one thing.  That wasn't the case though.  They seemingly do not want any of this extra coverage.
Yet, despite the stance, I am still drawn to this team.  The women athletes I knew best from the team,  like Dominique "DC" Collins, Deena Fagiano, Kim Perez, ChrisDell Harris, Yashi Rice, Alberts and Furr, along with Coach Keith Hac and Assistant Ryan Andrews were people I liked and respected.  I did not want to let go of all of this.  It was a lot of fun.
Where does this leave me?  I honestly do not know.  I plan on trying once again to offer coverage in 2018 to the team.  It may get rejected (again) or maybe not.  It's worth a try.
In either case, my respect and fandom always has gone to the women athletes.  They are tough as can be and the games are exciting.  Get beyond the "uniforms" and you would see an entertaining product with real competition.  See these women practicing hard all year round just to play a few games a year and they would earn your respect, too.
Time will tell how this all ends (or at least how it goes in 2018).  Either way, the Bliss and Johngy's Beat will go on.  It would just be fun (and make sense) if they went on together a bit. 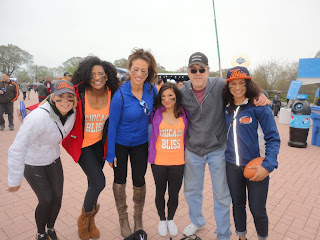 Cinda Barclay, Kristin Morrison, Deena Fagiano, Rosanne Ornopia, Dominique Collins and me in Chicago, IL-May 2016.
Posted by Johngy at 6:00 AM

Never heard of LFL, but just watched a YT video of highlights and was impressed. Those ladies can hit... and fight.


Hey Fuji-The LFL is a secret gem. I have been to dozens of games and practices. These ladies are great athletes and their dedication is amazing. Coach Keith Hac has a brilliant football mind. It's a shame they don't get more coverage.
Here is a link to all of my interviews with the Bliss over the years.

Very cool. Looks like their season starts around April. Look forward to checking them out.